We set off on Wednesday morning in good spirits – a trouble-free exit from Mangoes Marina in Marsh Harbour, and a quick stop to top up our fuel and we were underway – almost.  A bit of confusion over which of the 752 ropes on board were our jacklines before setting them up, then we made our way out of the Sea of Abaco through Man O War Channel and into the open ocean. Within minutes Padraig had his fishing lines in the water, all kitted out with the pink squid jig recommended by the locals. Success came quickly – a good-sized Mahi Mahi (dolphin fish) struck hard and the fight was on! Pat battled with it for about 15 minutes, with Terry positioning the boat so the fish couldn’t double back and sever the line. What a beautiful fish they are – it broke the surface with its strange bull head, and you could see the gorgeous dark green and flashing yellow of its skin, and its brilliant blue fins. Pat brought it in with great skill for a novice fisherman – his first ever ‘proper fish’ – Terry gaffed it and I administered the bourbon sedative, skinned and filleted it. 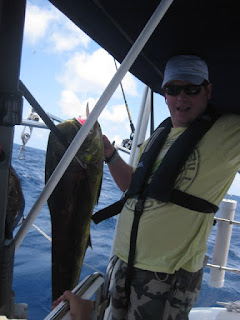 We’ve had fried fish, fish curry, fish fingers – and there’s more to go so it might even be fish tacos tomorrow for Cinquo de Mayo. 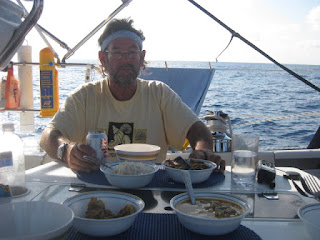 There was a decent breeze for the first 24 hours and we followed advice based on the weather reports to make as much way north as we could before the wind slackened and turned northerly. We were getting great speeds up to 8 knots and really fun sailing, but unfortunately the wind turned north easterly instead - right on the nose - and we were able to make little headway the next day. It was frustrating being able to travel in any direction but the one we wanted, so we did a bit of motoring just to get some miles on the clock.

Day 3 began well with a beautiful sunrise over silky calm water, and thankfully the wind gradually picked up so we were able to skim along at a respectable 4 – 5 knots over a smooth sea. 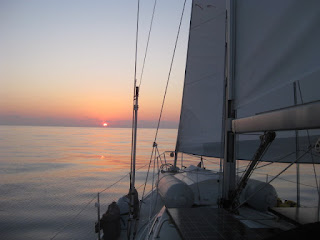 Another great Mahi Mahi lunch helped to keep our spirits up, as did the deployment of our Hydrovane (we are still debating the name of this valuable crew member)* which kept us tonking along nicely all day. All we really had to do was check our progress and make little adjustments – mostly to pretend that we humans were still in control of the boat. 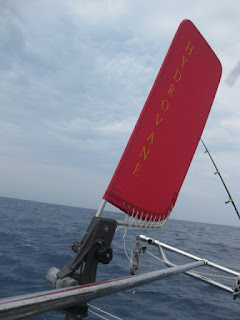 The vane really came into its own on Day 4 when we had a following breeze from the west. It’s hard to steer on this reach, with the constant threat of jibing, but the vane took over and handled it expertly for hours on end. We were pretty much redundant so we read, listened to music, Padraig went for his daily dip in the Atlantic and I made the tacos to celebrate Cinquo de Mayo, Mexican Independence Day. 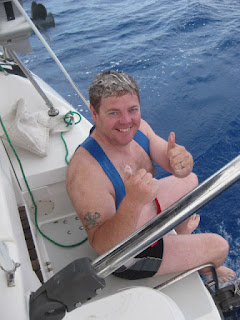 * The Hydrovane is now officially named ‘Arthur’ after my father – calm, steady, hardworking and totally reliable. I like to think he’s here with us in spirit.

The next part of the Bermuda passage gets scary and exciting - stay posted!
Posted by Carol at 20:19